We expect spiders to start appearing earlier in the year as a result of climate change, and they may also start breeding earlier and appear in areas that were previously too cold. However, at present in some areas, spiders have been appearing much later in the year than expected due to fluctuating temperatures and rain.

Click on the images below to learn more about the species, what to observe, and how to identify them, so you can contribute your ClimateWatch observations. 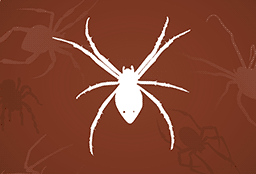 The Christmas Spider is known by several other names, most commonly Jewel Spider but also as Six Spined Spider or Spiny Spider. Females have bright yellow and white patterns with a ring of black spines. Melanic females have the same shape but may be completely black. Males have smaller spines and have a yellow, brown, white and black pattern. Six spines protrude from the sides and bottom end of the abdomen. Size Females are larger at 7 mm, males are 4 mm.
Published in Spiders

The female’s abdomen can be variable but is typically brown to yellow with short silvery-white hairs. The legs are usually black with bright yellow patches on the underside of the many leg joints. Its palps (small leg-like structures on either side of its fangs) are distinctly red. It makes golden webs, after which it is named. Size Females are 4 – 4.5 cm long but the tiny males are only 5 – 6 mm long (body length). The Females can have a legspan of up to 15 cm!
Published in Spiders

This spider is named for the cross the female weaves into the web. There are many theories about why the female does this including, strengthening the web, for camouflage, and for increasing prey catches as the cross reflects ultra-violet light which attracts insects. It may also deter predators which must go to the effort of cleaning off the extra silk after diving into the web. The female has a silvery head with silver, yellow, red and black bands across its abdomen, and two yellow stripes running down its underside. Its legs are dark brown to black with one or two yellowish bands. The male and juveniles are brown and cream, with brown legs. It often appears to have only four legs because it sits with its legs in pairs along the stabilimentum. Distinctive feature The zigzag patterns (known as the stabilimentum) it weaves into its web to form an X or a cross, after which it is named.
Published in Spiders