We expect frogs to start calling and laying eggs earlier in the year as a result of global heating. They may also start appearing in new areas as warmer temperatures enable them to live in environments that were previously too cold for them.

Click on the images below to learn more about the species, their phenophase behaviours, and how to identify them, so you can contribute your ClimateWatch observations. 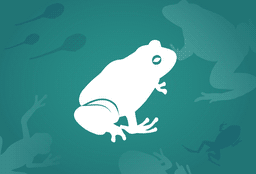 Cane toads have tough, leathery skin with a distinctive warty appearance. Usually grey, brown, reddish-brown or yellow in colour with a pale underbelly. Pronounced bony ridge above nostril and venom-producing gland behind the ear (behind the eye). Juveniles have smooth dark skin with darker blotches and bars. Cane toads sit upright and move in short rapid hops that can help distinguish them from other species. Average-sized adults are 10-15 cm long. Cane Toad tadpoles are shiny black on top and have a plain dark belly with a short thin tail. They are smaller (less than 3.5 cm) and often gather in huge numbers in shallow waters. Cane Toad eggs are laid in long strings of transparent jelly enclosing double trows of black eggs. The spawn tangles in dense masses around water plants.
Published in Amphibians

Ground-dwelling froglet with a slender body, slender limbs and slightly pointed head that is wider than long. The pupil is horizontal and the tympanum (eardrum) indistinct. Usually this frog is discernible by its distinctive ‘crick-crick’ call. The Common Froglet has extremely variable markings, with great variety usually found within confined populations. The colour varies from dark brown, fawn, light and dark grey. The colour of the ventral surface is similar to the dorsal surface, but speckled with white spots. The dorsal surface may be smooth, warty or have longitudinal skin folds.
Published in Amphibians

This frog goes by several common names: Eastern Banjo Frog, Eastern Pobblebonk Frog and Southern Bullfrog. The first two are based on its distinctive 'bonk' call which sounds similar to the string of a banjo being plucked. Its back ranges from grey, to olive-green, dark brown or black, with dark marbling or flecks. It has a pale yellow stripe running from under its eye to its arm, a dark band above this, and may also have a pale stripe running down its back. Its sides commonly have a purple or bronze sheen, mottled with black. Its belly is white and sometimes mottled with grey. Its back is warty and rough but its belly is smooth. Distinctive feature A prominent gland on the outer side of its hind leg (its shin) and a fleshy lump at the base of each hind foot.
Published in Amphibians

The moaning frog is a burrowing frog native to south-western Western Australia. This frog is quite rotund, with a large head and bulbous eyes. Brown or slate back with irregular yellow patches. Males have large limbs but show no distinguishing sexual features. Tadpoles Densely mottled with black and gold. Have a red or gold vertebral stripe and curved lateral line.
Published in Amphibians

The motorbike frog is a ground-dwelling tree frog found in Southwest Australia. It gets its name from the male frog's mating call, which sounds like a motorbike riding past and changing gears. Other common names are Moore's frog, the western bell frog, western green and golden bell frog, and western green tree frog. Back is green with gold mottling (after basking in sunlight). Can be almost dark brown in colder conditions. The underside usually ranges from very pale green to light brown. Tadpoles Large translucent yellow with darker areas. As they develop they become darker with deep fins and a pointed tail tip.
Published in Amphibians

The southern brown tree frog is native to southern Australia. Other common names of this tree frog are brown tree frog, whistling tree frog, or Ewing's tree frog. Ranges from pale fawn, cream, or orange to light brown, although some individuals in western Victoria and South Australia are partly or completely green. It has a wide brown band that starts from between its eyes and runs down its back. Darker flecks are also scattered across its back. It has a narrow black or brown stripe that runs from its snout to its shoulder, and a pale stripe that runs from below its eye to the base of its arm. Its belly is white to yellow and breeding males have a light brown vocal sac (beneath their mouth). Distinctive features Its back is smooth with small lumps, its fingers have no webbing and its toes are half webbed.
Published in Amphibians

The striped marsh frog or brown-striped frog is a common species in urban habitats It is a mostly aquatic frog native to coastal Eastern Australia. A pale to grey-brown back with darker brown stripes. Usually also a pale stripe running down the middle of its back. Its belly is white and often flecked with brown, and there are dark spots and stripes on its limbs. Size 4.5 - 7.5 cm
Published in Amphibians

The motorbike frog is a ground-dwelling tree frog found in Southwest Australia. It gets its name from the male frog's mating call, which sounds like a motorbike riding past and changing gears. Other common names are Moore's frog, the western bell frog, western green and golden bell frog, and western green tree frog. Back varies from pale brown to dark chocolate with areas of deep green or olive, red colouration in the groin and hind limbs. Tadpoles Large, black with deep tail fins.
Published in Amphibians

A ground-dwelling tree frog found in Southwest Australia. It gets its name from the male frog's mating call, which sounds like a motorbike riding past and changing gears. Other common names are Moore's frog, the western bell frog, western green and golden bell frog, and western green tree frog. Ranges from bright green to olive to pale brown, and it can change colour depending on the local temperature and environment. It has a white (occasionally pinkish) stripe on the back of each leg that runs down to its toes, and its belly is white. Size 11 – 14 cm
Published in Amphibians