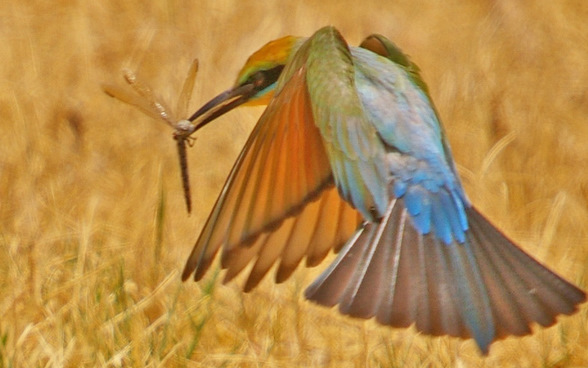 A colourful bird, the upper part of its back is bright green, merging to light blue on the lower part to its rump. Its tail is black, tinged with blue, and has two long central feathers (called streamers) that extend beyond the tip of the tail. Its forehead is blue-green and the top of its head is golden. A bold black eye-stripe runs from the base of its beak and is bordered below by a narrow blue line. Its chin is yellow, changing to chestnut on its throat, below which is a broad black band. It has a green breast, becoming paler on the belly and changing to light blue from the lower belly to the vent. It has a long, slim, curved black beak and its legs and feet are grey-black.
Young birds are generally duller and greener. They lack the black band across the lower throat and the long tail streamers.

The sexes differ in the length of their tail streamers: the male has longer, more slender streamers.

Mainly bees and wasps but also other insects such as dragonflies and damselflies, as well as moths and butterflies. Most insects are captured in flight, although some insects are very occasionally taken from the ground and foliage. Bees and wasps are rubbed against a perch to remove their sting before they are eaten, and other prey is usually beaten against the perch before being eaten.

Swift, and may include a series of rapid twists and turns when in pursuit of prey. It is usually seen in pairs or small flocks but sometimes occur in larger groups, sometimes of up to 500, when on migration.

Its patterns of movement are complex and not completely understood. After breeding, southern populations move north between February and June (mostly between March and May) to spend the winter in northern Australia, New Guinea or eastern Indonesia. They return to their breeding areas in southern Australia between August and early November, though mostly between mid-September and mid-October. In northern Australia, part of the population is present throughout the year, with some individuals moving to different habitats during the non-breeding season, while other birds from the population migrate to southern Australia.

It nests in loose colonies that may contain up to 50 pairs, although some pairs nest solitarily. They sexes select a site the banks of rivers, creeks or dams, roadside cuttings, gravel pits or quarries or cliffs, where both sexes (though mostly the female) dig a long tunnel. At the end of the tunnel is a nesting chamber, sometimes lined with grass or feathers. Between two and eight (usually five) pearl-white eggs are laid, which are incubated by both parents for 22–31 days. The young remain in the nest for 23–36 days, where they are fed by both parents. They continue to be fed for 2–4 weeks after they leave the nest. The parents are sometimes assisted by ‘helper’ birds, usually males. 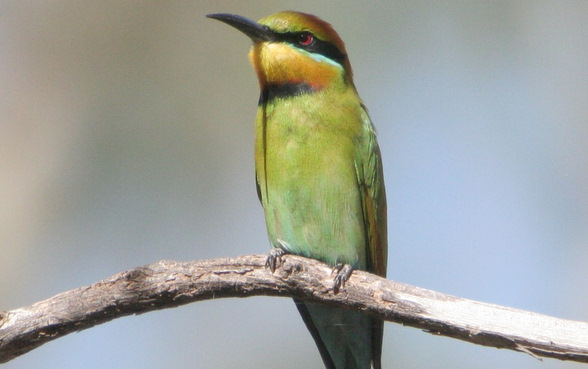 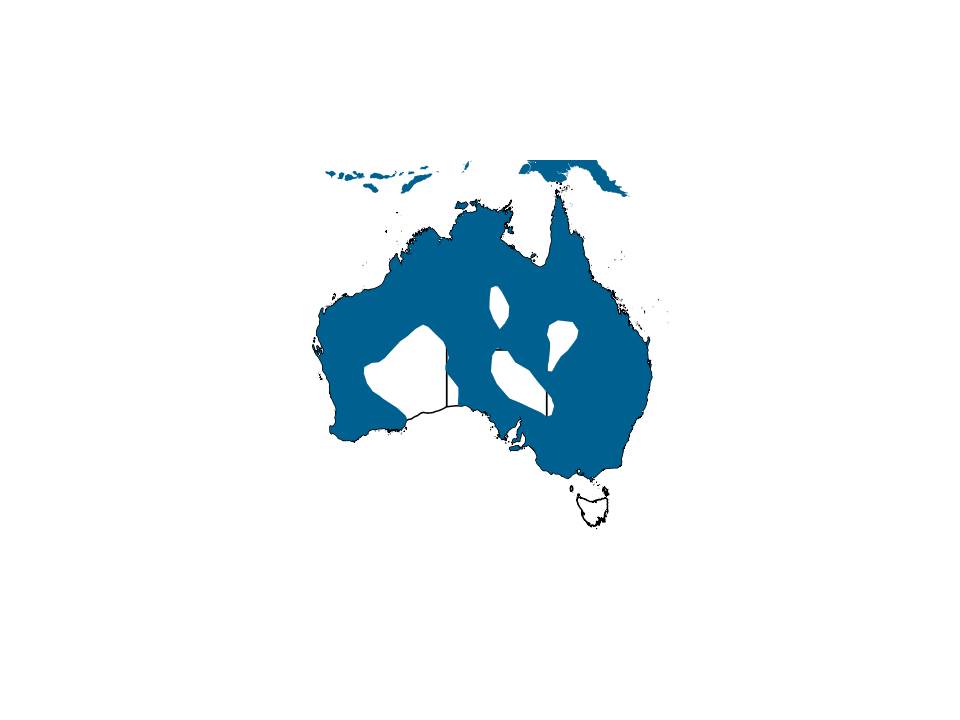 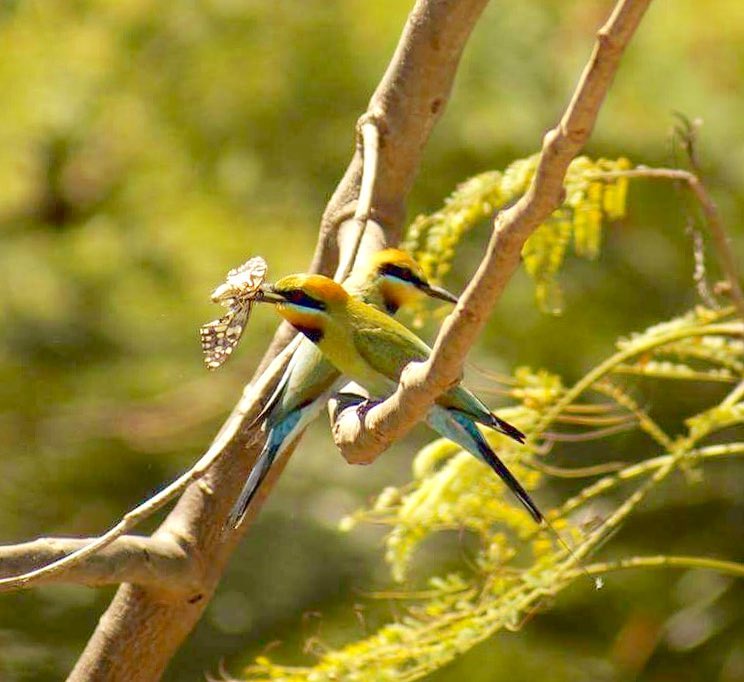 Kingfishers are plumper, have a straight beak, its plumage is less colourful and it never catches its prey in flight.

The Rainbow Bee-eater is a distinctive bird that should not be mistaken for any other species.